Nuclear Fusion: The Power of the Future?

Fusion power offers the prospect of an almost inexhaustible source of energy for future generations, but it also presents engineering challenges that, so far, are insurmountable. According to physics, fusion powers the sun and stars. When hydrogen is heated to very high temperatures, it changes from gas to a plasma state in which the negatively charged electrons are separated from the positively charged atomic nuclei (ions). But positively charged nuclei (Hydrogen) never get close enough to collide because of their strong repulsive electrostatic forces. To make this impossible task possible, we need a temperature close to 100 million Kelvin, causing the hydrogen ions to move at higher speeds and create pressure high enough to bring the ions close to 1×10-15 meters. The nuclei can then fuse, causing a release of energy.

Fusion Reactor Technology and its Challenges

In the sun, massive gravitational forces create the right conditions for fusion, but on Earth they are much harder to achieve. The aim of the whole fusion research program is to make it a self-sustaining reaction, so that the net energy yield is about four times as much as with nuclear fission. With current technology, the reaction is most readily feasible between the nuclei of the two heavy forms (isotopes) of hydrogen – deuterium (D) and tritium (T). Creating the conditions on the sun are a basic requirement for D-T fusion reaction. After this requirement is met, the fundamental challenge is to achieve a rate of heat emitted by a fusion plasma that exceeds the rate of energy injected by D-T fusion into the plasma. The second challenge is to apply the heat emitted by fusion reaction to human needs, primarily generating electricity. Thermonuclear fusion has a very low power density compared to nuclear fission, which means that any fusion reactor needs to be larger, and therefore more costly, than a fission reactor of the same power output. 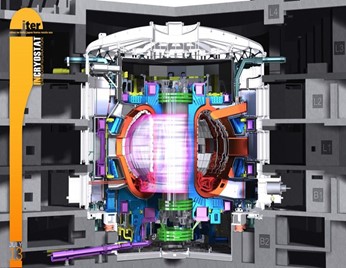 In magnetic confinement fusion (MCF), hundreds of cubic meters of D-T plasma at a density of less than a milligram per cubic meter are confined by a magnetic field at a few atmospheres pressure and heated to fusion temperature.

Magnetic fields are ideal for confining a plasma because the electrical charges on the separated ions and electrons mean that they follow the magnetic field lines. The aim is to prevent the particles from encountering the reactor walls, as this will dissipate their heat and slow them down. The most effective magnetic configuration is toroidal, shaped like a doughnut, in which the magnetic field is curved around to form a closed loop. For proper confinement, this toroidal field must have superimposed upon it a perpendicular field component (a poloidal field). The result is a magnetic field with force lines following spiral (helical) paths that confine and control the plasma. There are several types of toroidal confinement systems, the most important being tokamaks, stellarators, and reversed field pinch (RFP) devices. 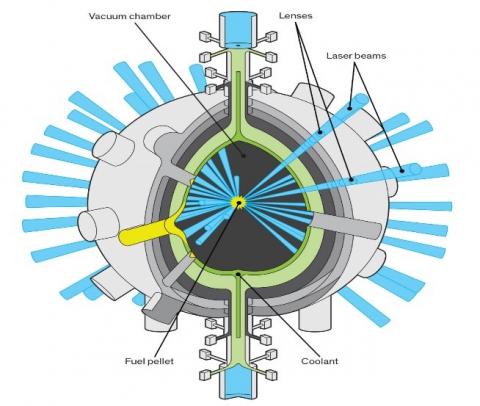 In inertial confinement fusion, which is a newer line of research, laser or ion beams are focused very precisely onto the surface of a target, which is a pellet of D-T fuel a few millimeters in diameter. This heats the outer layer of the material, which explodes outwards generating an inward-moving compression front or implosion that compresses and heats the inner layers of material. The core of the fuel may be compressed to one thousand times its liquid density, resulting in conditions where fusion can occur.

Other promising technologies are magnetized target fusion (MTF), also referred to as magneto-inertial fusion (MIF), which is a pulsed approach to fusion that combines the compressional heating of inertial confinement fusion with the magnetically reduced thermal transport and magnetically enhanced alpha heating of magnetic confinement fusion. Advantages include making it easier to stabilize the plasma for long periods and it’s a lower-cost, simpler approach to reduce confinement time and compression velocities

Fusion can also be combined with fission in what is referred to as hybrid nuclear fusion. Initiating a fission chemical reaction in a fusion reactor, where heat and neutrons generated from the fission reaction will start fusion. Advantages are that the reactor can withstand constant neutron bombardment, it’s smaller than commercial-scale fusion reactors, and requires less energy to start the reaction.

Fusion power could easily satisfy the energy needs associated with continued economic growth, given the availability of fuels, but it will have an impact on the environment over time.

Fusion generates short- to medium-term radioactive waste problems due to activation of the structural materials. However, activated product wastes would be handled in much the same way as those from fission reactors with some years of operation. There are also other concerns, principally regarding the possible release of tritium into the environment. It is radioactive, very difficult to contain, and a threat to health for almost 125 years after it is created either as a gas or in water, if at high levels. This is one reason why long-term hopes are for the deuterium-deuterium fusion process, dispensing with tritium.

While fusion power clearly has much to offer when the technology is eventually developed, the problems associated with it also need to be addressed if it is to become a widely used future energy source.